Ronda Kennedy for Congress: What You Need to Know

Ronda Kennedy, formerly Ronda Baldwin-Kennedy has announced that she's running for Congress (Congressional District 26) against Congresswoman Julia Brownley in 2020. The political run is the sequel to Ronda's 29,000-vote loss in her wildly unsuccessful 2019 "effort" to take on Assemblymember Jacqui Irwin. As a constituent in the area she's running to serve, I wanted to take a moment to share my personal experience with Ronda Kennedy.

This is not an official website for Ronda Kennedy or her campaign. You can find her official site, here.

STORY TIME
(But don't read it before bed if you don't want nightmares.)

I was flabbergasted that a political candidate was interacting in such a way on Twitter, but I honestly didn't expect it to go much further than that.

Days later, I was notified that the woman who I was seeking a permanent order of protection against, fired her lawyer and hired Ronda to take over as counsel. She had observed Ronda's interaction with me on Twitter, and even commented underneath the exchange that she loved Ronda.

This put me in the position to experience Ronda Kennedy in all her incompetence throughout the duration of a court matter that would go on for nearly 10 more months.

Given that Ronda eagerly talked about the case to press here and here, I believe she took on the case believing the press and attention she would garner from it would boost her political campaign.
Ronda's tactics, as it would appear to me, became clear rather early. She absolutely buried my lawyer in unnecessary discovery and paperwork requests. As my lawyer explained it to me, there are some lawyers who will do this in hopes of suffocating the petitioner financially, forcing them to drop the case, simply because it would be too costly to continue. Now whether that was her intent or not, all I can say is that my lawyer logged a shit ton of hours on this. So many hours in fact, that it chalked up to a $65,000 bill for the respondent, upon the judge concluding the case in my favor. That's a LOT of hours.

In addition to paperwork shenanigans, Ronda called multiple last-minute "emergency" hearings, (of which she often got the time wrong for court), and attempted to have the case dropped multiple times, dragging my lawyer to court each of these dates. She was not successful in any of these attempts. And then there were the subpoenas. She sent out more than half a dozen incomplete subpoenas ... ya can't make it up.

During one of these hearings, when I refused to drop the case, she told my lawyer that if I did not drop the case, she would seek a restraining order against me. That felt unethical to me. I've never heard of legal counsel (let alone a political candidate at the time), using the threat of legal retaliation to scare/silence a petitioner.
By the way, Ronda's inept ability to navigate the law, let alone a courtroom, was absolutely astounding to behold. But moreso, was the fact that the judge concluded multiple restraining order violations had occurred — of which Ronda Kennedy was involved in. SHE WAS THE LEGAL COUNSEL and was present for and/or involved in the violation of the restraining order on multiple occasions — one of them being at her own campaign fundraiser.

​That should tell you what you need to know.

​Did I mention in her closing statement, that she admitted that all of the witnesses she called against me had "credibility issues"?
What you may not know is that, because Ronda Kennedy was not only a political candidate at the time of my court case, but also opposing legal counsel, she sought to block me, a constituent, from engaging with her on political issues.

After I replied to a political tweet of hers on Twitter, she emailed my attorney and threatened that she would have to seek "protection from the court" if I attempted to engage with her further, claiming "harassment."

​That however, didn't stop her from constantly tweeting about me. As you can see in the example, she was prone to taking multiple screenshots of my page, and tweeting about me, while she was opposing counsel. So, she used her role as "opposing legal counsel" to make threats of legal retaliation against me if I engaged with her directly about political issues, but then when I respected that, and shared my opinions on my own page, she took screenshots, and complained on her political page ... while she was opposing counsel. 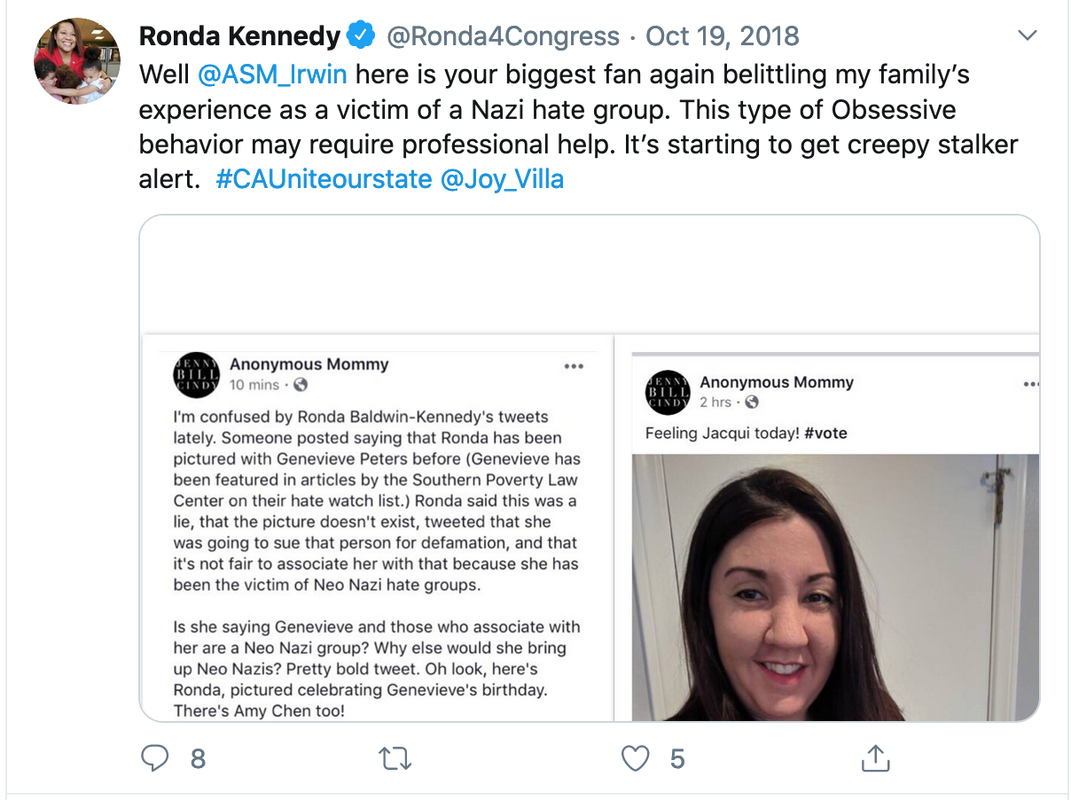 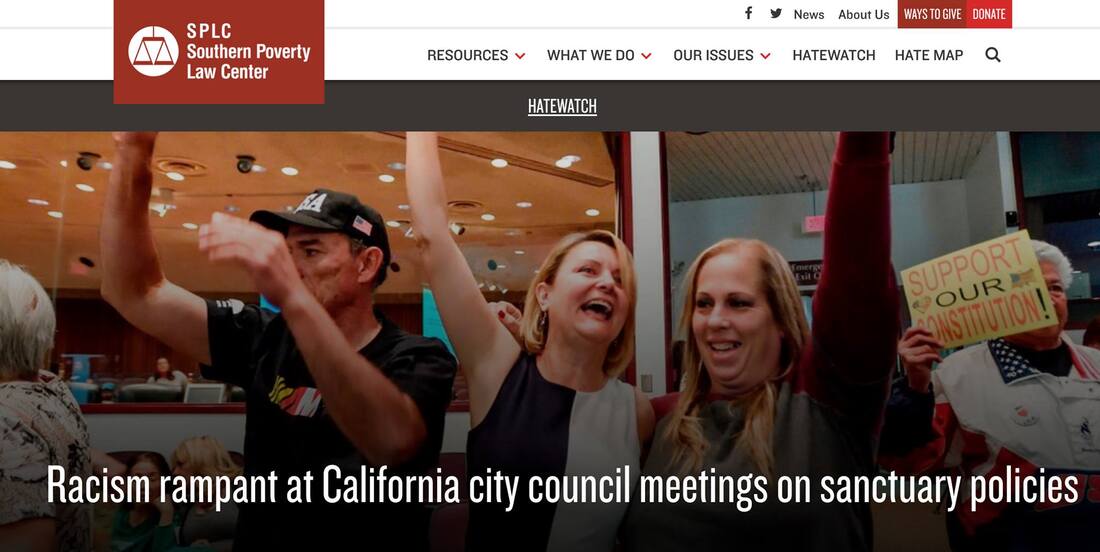 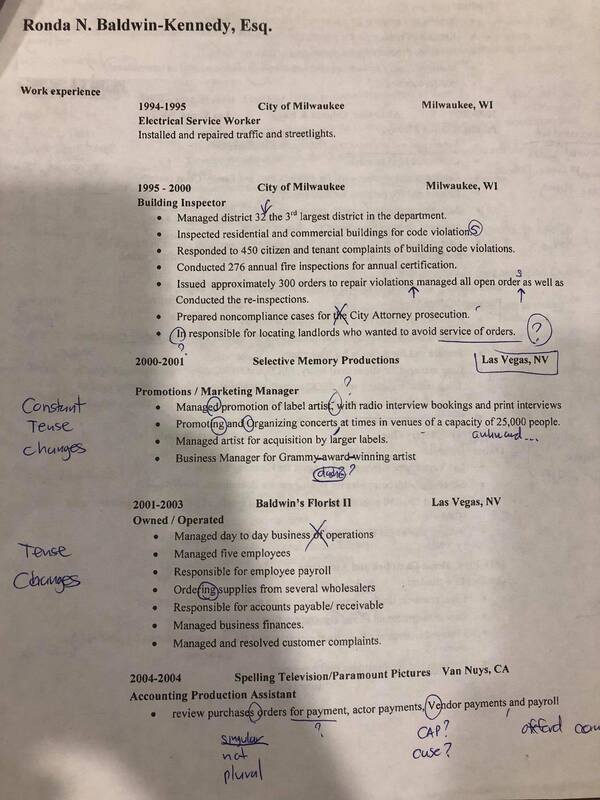 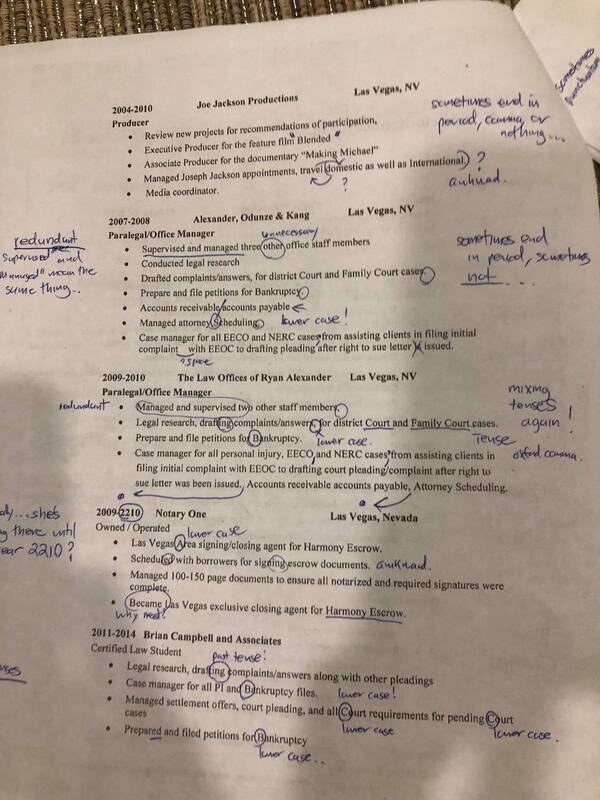 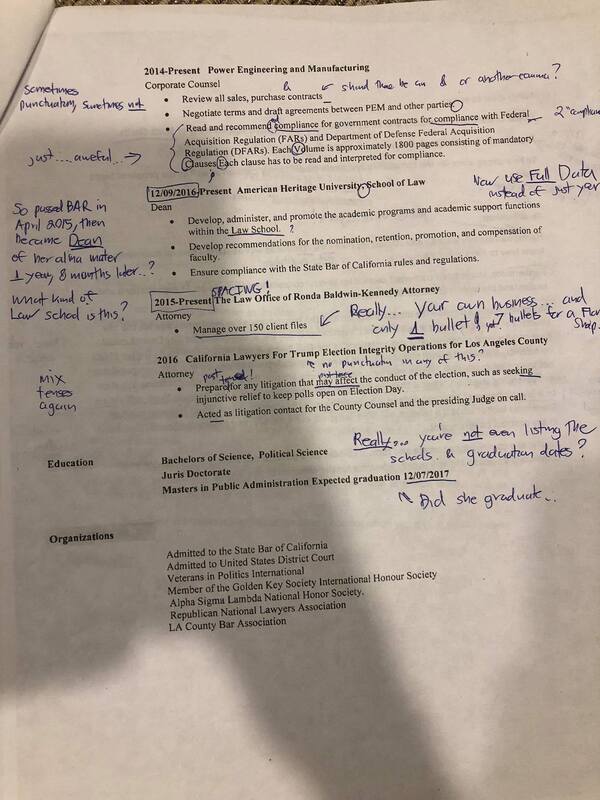 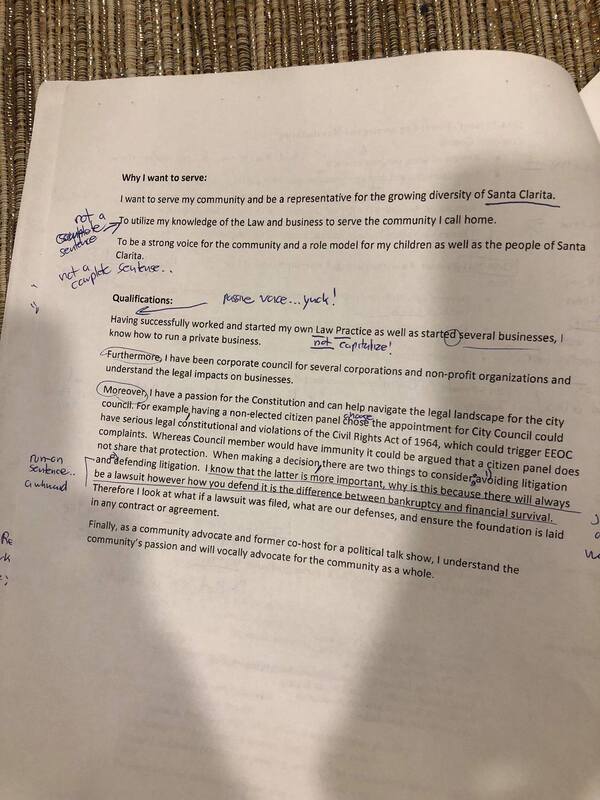 As it turns out, a friend happened across her resume (back when she was running — unsuccessfully — in Santa Clarita) and offered some free editing. It's a pretty big case load (pun intended!), so I'm offering a bit of advice and free editing as well.

Page 1:
Wait, why are there 4 pages? FFS. No one needs to know what your allowance was when you were five and doing house chores, Ronda. Ronda. Sweetheart. Start with your most current position and work your way back. Always. Nobody cares what you were doing in 1994. NOBODY. (Unless you were murdering someone ... and I'm not ruling that out!) Consistency is key Ronda. If you're going to use a period after a bullet point ... you need to use one after every bullet point. If you're going to put returns in between job titles and duties, it should be consistent.
Good lord. What do you have against hyphenation? Let's practice: "day-to-day business"
Commas. They matter. Tense really matters. If anything, pick one. Page 1 is having an identity crisis right now.
Is there a reason for the random capitalization? General job titles that aren't specific should not be capitalized. And random words in the middle of bullet points should not be capitalized. That being said, the beginning word of each bullet point should be capitalized.
Another general tip: the way you display your title, dates worked and location should be consistent in formatting and location for each and every section.

Page 2 (and you thought page 1 needed work!):
"Case manager for all personal injury, EECO and NERC cases from assisting clients in filing initial complaint with EEOC to drafting court pleading complaint after right to sue letter was been issued."
>Was been issued.<
We haven't yet hit the year 2210.
Yo, there's a lot here to digest. Start with the handwritten edits and then we can circle back with fresh eyes on page 2.

Page 3:
My eyes are bleeding. I'm a bit baffled. Is there a reason you're omitting where you received your education degrees? Ronda. I see that you note that you "ensure compliance with the State Bar of California rules and regulations." (That's interesting!)

Conclusion: Set fire to this and start over. Seriously.
I find Ronda Kennedy to be one of the most unethical people I've ever come across, and someone completely unqualified not only for any role as a political representative, but as any sort of leader, really. I thought this was something important for me to ensure that people knew about. This to me, isn't a conversation about whether you're a Republican or a Democrat. It's about the character of a person. I do not want someone I believe to be of bad moral character and questionable ethics — personally, professionally and ethically — to represent our community.

Did I mention she came out in support of Scientology and after she received backlash on Twitter, and from Leah Remini, she deleted her tweets about it? You can see the Scientology tab for an example. Add that on to her recent participation in QAnon conspiracy theories (attending marches, being pictured with people holding up the #WWG1WGA hashtags, etc.) ... this is who you want representing us? 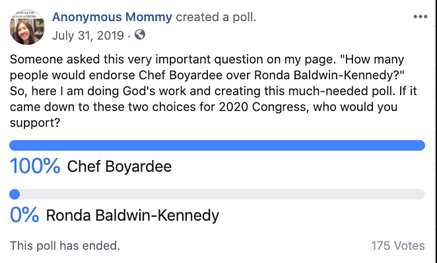 Ronda Kennedy for Congress
P.S. Did I mention the time I ran a poll on my page, and 100% of the people who participated voted that they'd rather be represented by a can of Chef Boyardee than Ronda Kennedy?


I rest my case, your honor! 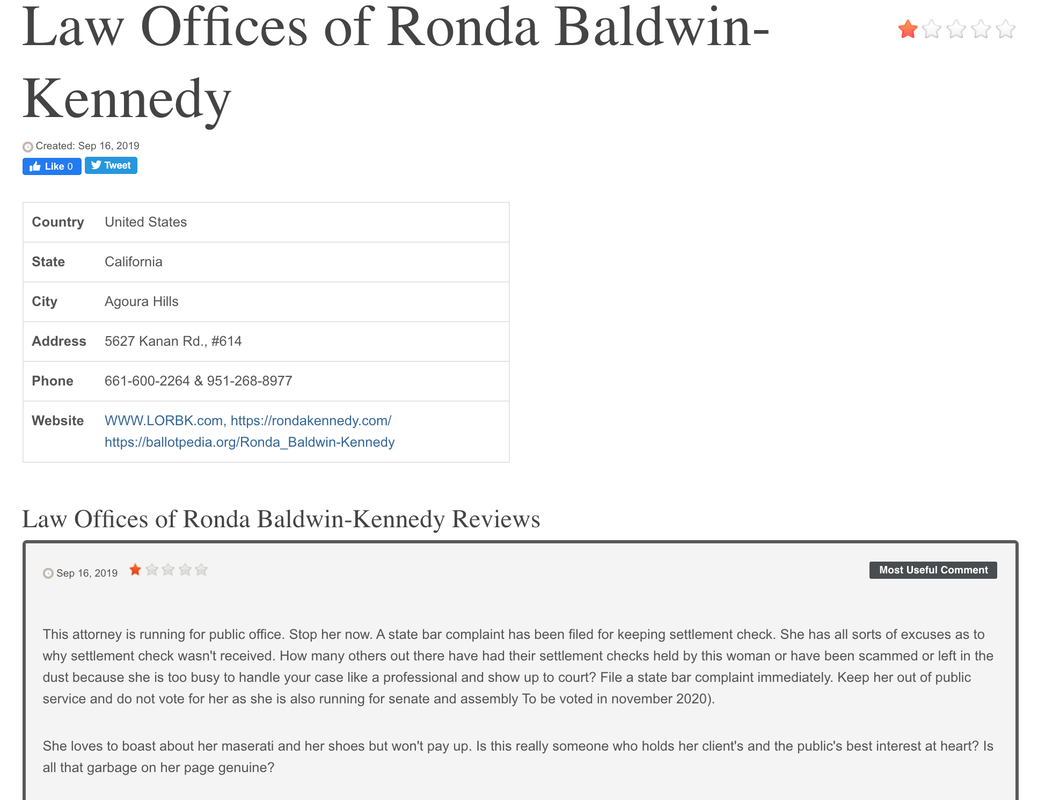